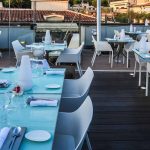 Method:
Holding the sea urchins in a cloth, open them one by one, and with a pair of scissors cut away the flat part: strain and filter the water into a bowl, remove the orange pulp and put to one side.
Start cooking the spaghetti in a large saucepan of salted boiling water and at the same time fry the peeled and finely sliced garlic, together with the chili pepper, in a large frying pan until golden brown
To be “al dente” the spaghetti should be cooked for about 12 minutes. Then drain and toss in the frying pan.
Remove pan from the heat and add the sea urchins, the strained water a dash of extra virgin olive oil and the wild black fennel.
Once served sprinkle with crushed ‘taralli pugliesi’.