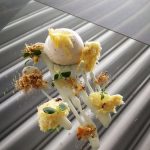 For the coconut milk and white chocolate sauce:

For the bisquit, whip the egg yolk and sugar, add the sieved powders, whisk the egg whites and sugar and add to the rest of the mixture.
Spread in pan and cook at 220 ° for 6 minutes.
For the Iced, chop the panettone with the termomix with milk and seed oil in the meantime prepare an Italian meringue, bringing water and sugar to 121 degrees, begin to whisk the egg whites and pour the syrup flush. Whip the cream, add the meringue panettone and finally the cream, pour in the single-portion molds close with the cupped bisquit. Freeze and unmold.
For the coconut milk sauce, heat the coconut milk and white chocolate, filter and allow to cool.